Ottawa Magazine reveals its inaugural “The Future List” highlighting the amazing work of city leaders in the Winter 2021-2022 issue.

Ottawa Magazine reveals its inaugural “The Future List” highlighting the amazing work of city leaders in the Winter 2021-2022 issue. 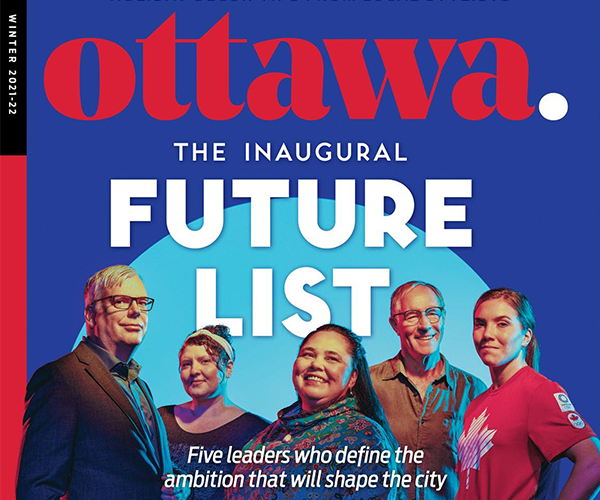 (OTTAWA, ON) November 30, 2021 – Today, Ottawa Magazine reveals its inaugural “The Future List” highlighting the amazing work of city leaders in the Winter 2021-2022 issue. A growing population, shifting urban boundaries, and the changing nature of office work all mean Ottawa is in the midst of great change. In these times, we need leaders who represent the kind of change the city needs: people who have overcome obstacles, remain optimistic and, more than anything, have a vision.

Taking the brand’s mandate, “To inspire the ambition that will shape the future of our city,” the Ottawa Magazine team looked for people who embody that ambition — the people who not only leave their mark but have a clear vision for how they plan to shape the city. In the early stages, the team turned to its former publisher, Dianne Wing, whose experience at the helm of the magazine for 20 years gave her a unique lens on the city — and, more importantly, connections to a long, diverse, and inclusive list of people with whom it could consult. Dianne went to work and came away with a long list of exceptional candidates.

“It wasn’t an easy task to get to a list of five honourees,” said Duncan Clark, Publisher, Ottawa Magazine. “The process left us, more than anything, feeling optimistic. Ottawa is full of emerging leaders who are ready to create an ambitious future for the city. This year, these five stood out from the crowd, and we’re excited to tell their stories.”

Those named on “The Future List” — which will be an annual feature — embody the initiative, drive, patience, and humility that are required when combating racism and inequality, navigating government bureaucracy, and succeeding under pressure. The honourees do not let the past dictate their future but rather use their experiences to work for the benefit of the whole. In choosing these five people for our inaugural Future List, Ottawa Magazine is adding our voice to the choir of admirers — and revealing leaders not only in name but in a way that paints a picture for others to follow in their footsteps. The five individuals making headway in this new world include:

Before she was known as an Olympian, Vanessa Gilles spoke at the United Nations to promote equity in sports. She fought depression in high school and found her solution in soccer.

“I went through a lot in high school, and I wasn’t necessarily very open about it. I battled through depression. It was kind of stigmatized at the time. We didn’t have Bell Let’s Talk, you didn’t have these big athletes coming out and talking about it and normalizing it,” said Gilles. “Believe in yourself. You’re always your best advocate, and nobody’s going to believe in you like you do, and nobody’s going to push you forward unless you do it yourself.”

Approaching sustainable energy from a fiscal point of view — and with a lot of determination — has proven successful for the co-founder of Ottawa Renewable Energy Co-operative.

“My parents came through World War II. They left thinking Holland had no future, and they were dead wrong. Now we’re in this situation, which has a lot of similarities to the ’30s and ’40s, and we’ll be wrong in our pessimism as well,” said Bakkler.

The restaurant industry is in need of an overhaul, and chef Harriet Clunie is leading the way by finding ways to make life better for the people who prepare our food.

Embracing her Inuit heritage sparked a career in advocacy, arts, and adventure for Lynda Brown. Her tireless work aims to instill pride in Inuk children and youth.

“Inuit today are so proud of their culture. That wasn’t there before. Taking up space is a little bit easier now,” said Brown.

The person behind the new official city plan offers a lifetime of experience in urban design — as well as a patient, yet bold, leadership style that seeks to unite.

“There are lots of big dreamers out there trying to build utopias. For me, it’s a game of nudging. I’m more in the nudge category than in the lecture category,” said Willis.

The Winter 2021-2022 issue, featuring “The Future List,” is on newsstands now and CLICK HERE for additional information.