From interview prep to tech set-up (and let’s not forget what to do with the kids!), here are some tips to inform your next Instagram Live.

From interview prep to tech set-up (and let’s not forget what to do with the kids!), here are some tips to inform your next Instagram Live. 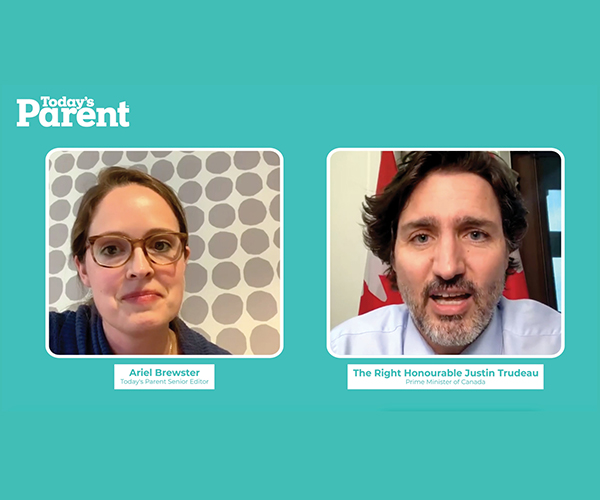 Earlier this month, with 48 hours to plan and prep, Today’s Parent Senior Editor Ariel Brewster found out she would be interviewing Prime Minister Justin Trudeau in a 15-minute time slot via Instagram Live. The topics? The plan for families in the 2021 Federal Budget and some lifestyle questions including pandemic parenting.

Following the interview (and impressed by her calm composure and smart questioning!), we checked in with Ariel for any after-the-fact insights or tips.

I really had no real equipment for a live broadcast. Thankfully, low-tech is kind of the aesthetic on IG Lives. (And the two faces really take up the whole screen, so the background of the shot isn’t super important.) So I propped my phone on a puzzle box and a flower vase! And I set up in our dining room with the best natural light (no ring lights at my house!). This meant that sound-wise, I was worried about the kids being underfoot. So, my main tip is to have your wonderful husband take the children to the park during your big interview. 🙂

Finding out so last minute was definitely a scramble, but I would also say that this was a silver lining, to use a pandemic cliché. I didn’t have a long time to get nervous and overthink it or over-plan. I really tried to focus it on what parents are talking about and worried about right now—parent to parent, and what I knew our readers would click on—and not feel intimidated by the fact that this is the PM and I’m not a seasoned Ottawa political reporter. Our readers just want the TL;DR (“too long, didn’t read)—we’re busy! And distracted.

I do recommend practicing the IG Live function a few times with a colleague beforehand; it’s pretty clunky and it’s stressful to be in charge of the production of the interview (like literally hitting the play button and adding the prime minister to the call) WHILE you’re live on camera, and trying to think on your feet. I put my phone on LTE for the Live instead of using WiFi. I didn’t want any weird connection issues and luckily we didn’t.

To prepare, I listened to a few interviews on CBC with Chrystia Freeland talking about the budget, I read Shannon Proudfoot’s Maclean’s piece about the budget (and particularly child care), and re-read a few daycare stories we’ve published in Today’s Parent during the pandemic. We’ve been following this file for a while, obviously, so it wasn’t super hard to get up to speed.

I also found that I was more nervous prior to the interview (like all Wednesday morning) but once we were on and camera was rolling and we were just chatting, my nerves dissipated. I just tried to pretend I was talking with a dad friend and fellow parent—a particularly powerful one!

Watch the full conversation below! Thanks to Ariel for sharing her experience and insights. Ariel has served as Today’s Parent Senior Editor since 2012, winning two National Magazine Awards in the process. Prior to Today’s Parent, she worked at The Grid, Toronto Life, The Walrus and New York Magazine.  As referenced above, she has two young children, ages 3 and 6.