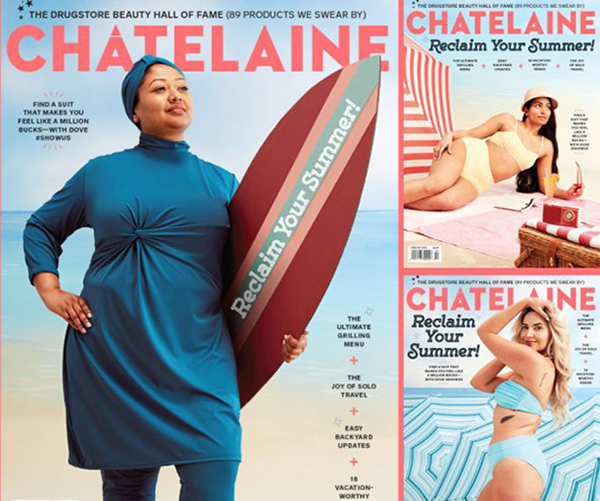 December 16, 2019 (Toronto, Ontario) – Chatelaine’s editorial cover integration with Dove for its June/July 2019 summer swimsuit issue earned a Silver for Best in Content Publishing – the lone award handed out in its category – at the Media Innovation Awards announced on November 28, 2019.

Aligning with Dove’s focus on self-esteem and its new #ShowUs project, Chatelaine produced five covers featuring untouched “Everywoman” models in swimsuits to showcase body positivity amongst its 3.6 million readers. The issue also featured an ad calling on agencies and advertisers to up their representation of real women.

“This cover execution was a win-win-win for Dove, Chatelaine and our audience, and I could not have asked for a better partnership to kick off my tenure as editor-in-chief,” says Maureen Halushak, who joined Chatelaine in early 2019. “Our real-women models exuded confidence and joy, and exemplified our mission for this shoot: to showcase and celebrate swimsuits for all bodies. But the hands-down best part of this project was the ecstatic feedback we heard from our readers.”

The innovative and inspiring cover integration is a Canadian extension of Dove’s #ShowUs campaign born of the research that only 70% of women feel represented in the media. Partnering with Getty Images and Girlgaze, Dove created a global stock photo collection of over 5,0000 women portrayed the way they would like to be seen. Chatelaine sourced from this image bank for any stock imagery appearing in its June/July issue.

“The partnership between Chatelaine and Dove was so hugely successful in large part because Dove trusted our brand to know our audience and execute this joint vision,” says Jessica Robinson, Branded Content Editor. “ We aligned our respective goals – ultimately, to represent our readers honestly in a way that they actively seek from media brands – and from there, Dove let our team take the lead on developing a striking and impactful program that we loved as much from an editorial perspective as they did from an advertising perspective.”

Chatelaine received incredibly high engagement from its readers for the June/July edition across social media and in letters to the editor. Here are a few sample letters that demonstrate the issue’s positive impact on women’s self-esteem and diverse representation.

“Thanks for your latest covers! It was wonderful not to see toothpick-size women—I wish all magazines would follow your lead. Although I am 20 to 30 pounds overweight, I feel as confident as those beautiful woman on the multiple covers. Keep up the great work.”
—Cathy, Tillsonburg, Ont.

“I was thrilled to see a full-size model on your cover. I am so tired of magazines that showcase the small percent of women who are under a size 8. When I look around, most of the women I see look nothing like those shown in magazines. Bravo Chatelaine for getting it right! Please continue to represent the diversity of the Canadian population, both in ethnicity and in size.”
—Susan, Toronto

“I was walking in Sobeys today and did a literal double take when I saw the cover of your June/July issue. The woman on the cover is beautiful and happy, and her body looks like mine. It was such a lovely thing to see, and it brought tears to my eyes! Thank you so much—this means the absolute world to me and to millions of other women who struggle with their self-image every day. It’s a small step, but I promise you it makes a huge difference.”
—Riley, Toronto

Managed by Strategy, the Media Innovation Awards honour the best media plays and programs in Canada each year. For the Best Use of Media – Best in Content Publishing award, content must have been published in print (including newspapers, magazines), but may also have additionally been published in a digital format. With over 10 entrants in the category, judges only awarded the Dove x Chatelaine #ShowUs collaboration.

About St. Joseph Communications
St. Joseph Communications is Canada’s largest privately owned print, media, and communications company. Whether the channel is mobile, online, print, bricks-and-mortar, or all of the above, SJC creates integrated cross-platform content solutions that deliver a seamless brand experience. The company brings its 60+ years of award-winning expertise to leading retailers, publishers, cataloguers, and financial corporations in North America. SJC also owns and publishes some of Canada’s most iconic and celebrated media brands including Chatelaine, Toronto Life, FASHION, Weddingbells, Today’s Parent, Maclean’s, HELLO! Canada and the Where Group of Magazines in Vancouver, Calgary, Ottawa and Toronto. SJC is a 2019 Platinum Club winner of Canada’s Best Managed Companies, marking 16 consecutive years of recognition.