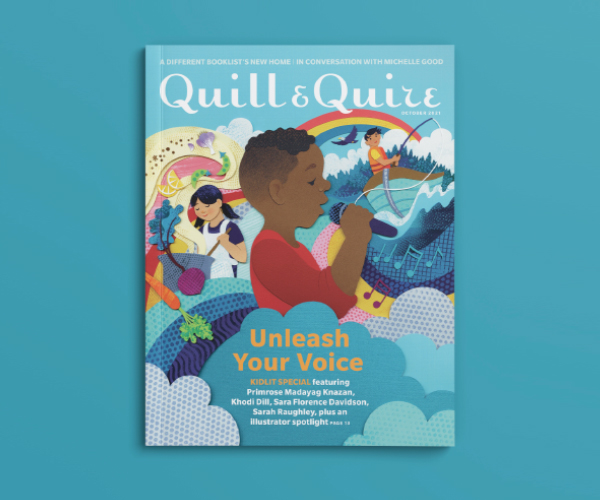 Quill & Quire is the must-read for the Canadian book industry, published by SJC Media. Its October issue spotlights the annual KidLit special, featuring books for children and young adults.

Inspired by the colourful, multi-dimensional cover, we followed up with Quill & Quire Art Director Adrian Doran to get a glimpse into the creative process behind it. Here’s what Adrian had to say:

Inderjit Deogun, Books for Young People editor, steered the issue under the theme “Unleash your Voice,” based on recents works about young people expressing creativity and identity through their heritage. These include the new Sk’ad’a Stories series about traditional Indigenous principles; Primrose Madayag Knazan’s novel about Filipinx and Jewish food heritage; and an essay by Khodi Dill about the expressive power of rap.

To feature all these elements in one cover image, we decided to commission an illustration from the brilliant Ashley Barron, an illustrator I’ve wanted to work with after seeing her books Love You Head to Toe and My Ocean Is Blue. (She’s also the illustrator of Chaiwalal!, reviewed in this issue of Quill & Quire.) I used some of Ashley’s illustrations to create a rough cover to demonstrate to Inderjit how Ashley’s collage style using cut-paper, textures, and terrific sense of composition could express all those ideas into one thought.

After briefing Ashley on the project, she got started with some rough pencil sketches (see below). I asked Ashley how the process went from there:

“During the sketch phase, I found it helpful to reground myself with Adrian’s original brief, which included links to three featured books that coincided with this theme of ‘Unleash Your Voice,'” says Barron. “I did a little deep dive into the authors and subjects behind these books, and in the process I was deeply moved and motivated by what I’d found. (The NFB film Now is the Time, a 50th anniversary retrospect on Robert Davidson’s pole raising, and Khodi Dill’s recent interview with Annick Press in which he compared a cypher to a building stormcloud, both really influenced the outcome of this piece.)

I wanted the cover to have a lot of movement, to convey that flow state we all get when we’re fully absorbed in an activity. The hardest part was narrowing down the colour scheme, and placing just the right hits of punchy colours in ‘just so’ places. The art was cut from paper and assembled with tape and glue stick. I slid pieces of cardboard under the areas I wanted to raise, which pronounces their shadow when it comes to scanning or photographing the artwork. Some details were made with pencil crayon, and the patterned papers were hand-printed using acrylics. The only part added digitally was the eagle’s eye. I’m pretty sure I entered the flow state while making this piece, and I’m really happy with how everything turned out.”

The Quill & Quire team is really excited about the final result, and I love the subtle 3-D effect from the raised edges on the cut-paper elements.

Ashley was great to work with. I like to create some light branding for special sections like this, and thought the cloud elements in the corner of the illustrations would work as frames for the section title, in the outside top page corners. I asked Ashley if she could photograph the cloud details separately, but instead, she created a set of six new details for me! I couldn’t be happier with the experience and we’re really pleased with the entire package.